I first heard the term “consolation prize” on a television game show when I was growing up. Since I don’t watch television much, I wonder if this term is still used. As a consolation for losing, a small cash prize was given to a player who did not win the grand prize. Why am I talking about game shows and consolation prizes?

A couple of Sundays ago toward the end of his sermon on marriage, Pastor Peter asked us to change how we daydream about our reunions with our spouses in heaven. My husband, Steven, died two years ago, so I was certain Pastor Peter was talking directly to me. I admit that early on, I wanted the dream scenario he depicted, Steven and me walking hand in hand gazing into each other’s eyes. However, he told us that our dreams were too small. The wonder of seeing Jesus in all His splendor and glory, which outshines anything we can imagine about our late spouses, will cause our eyes to be riveted on Jesus. He is the husband with whom we will unite and for whom we have waited. Our love never ends, but our earthly marriages do end with death and serve to point to the eternal marriage between Christ and the church.

As I thought about the sermon afterward, I can say that Jesus had already begun to be the object of my daydreams, but it was not always so. Soon after Steven died, I looked to Jesus to fill the emptiness left by him. Although I didn’t realize it then, Jesus became Steven’s substitute, almost as if I needed Him only until I reunited with Steven. My mind turned the Lord into my consolation prize, having lost the grand prize.

But the Holy Spirit did not allow me to remain in that condition. He used trials and suffering to reveal the state of my heart; my love for Him was lukewarm. He showed me that nothing besides Jesus should be the greatest desire of my heart, but other things, including Steven, had captured it. I repented of my idolatry, and over time, imagined a heavenly reunion, it was with Jesus more and more. Jesus is no longer my consolation prize. He is the grand prize. He always was. All of us believers, who accepted the payment Jesus made on the cross for the penalty of our sins, have won the grand prize, but more than that, He is the ultimate prize. He is the pearl of great value and the treasure hidden in a field (Matt. 13:44-45). We must always remember this truth and treasure him as our most precious gift, not letting anything else captivate our hearts.

As we begin Advent and celebrate the first coming of Jesus, let us all examine ourselves to see if someone or something has captured our hearts besides Him. Let’s look forward to His second coming, to being enthralled by the splendor of His glory when we will finally see Him face to face!

Whom have I in heaven but you?
And earth has nothing I desire besides you.
My flesh and my heart may fail,
But God is the strength of my heart and my portion forever.
Psalm 73:25-26 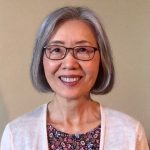 Shelley Hahn is a Deaconess.  She has been a member of GRC since 2015.