Given the pandemic, I haven’t seen my barber in months. And yet, he’s on my mind regularly these days. Not so much because I miss his services –  although I do –  but because of a criticism of Christianity he shared with me; a criticism he considers valid. In more or less words here was his critique: “A spirituality that is so bent on heaven will naturally make its adherents absent minded and negligent here on Earth. Or in other words: Christianity makes one so Heavenly-minded, they are no Earthly good.”

Upon hearing this, I remained still – I was getting a haircut now – but his words cut. True Christianity does not rob us of effectiveness on Earth – he is wrong – but it’s not the first time that our failure as saints hid and obscured the truth of God’s word. Too often “gospel culture” and “Christocentrism” are reduced to words, mental assent and theory, leaving the commands of Christ and their implications behind.

Consider this hypothetical as an example of the stated imbalance: A man in a local church is mighty in the Scriptures, but he has a bad attitude and everyone knows it. He is short-tempered and can hold a grudge. He leads a Monday night study and it’s well attended, but nobody grows close to him as they anticipate it being a rough-going. All steer clear, so all is “well”…except for his children who can’t escape it. What do they make of all this?

Now, my barber could easily read any Gospel and see Jesus’ great concern for the well-being of others; or if he was really interested he could read of John Calvin’s work in Geneva and how every week he took his church members up on moral matters; or of Charles Spurgeon and George Mueller’s great work in mercy ministry, but he won’t. His convictions are colored by his experience in his local church growing up, his convictions are colored by the witness of his parents. And to a degree that is legitimate. He is wrong, but I understand why he views our most holy faith the way he does.

I may never win my barber over to the faith. I may find that as I engage one objection of his, it is only met by another – for our opposition to Jesus is from the heart, not from the head. And yet, because I have been praying for him, I’m eager to engage him again on these matters. When I do, what Scripture will I have in mind? Well, right now I’m sitting on Isaiah 58, a chapter on fasting and how God doesn’t hear Israel’s fast because they aren’t moral people – they aren’t concerned with their sin on Earth. I’m of the mind to memorize a few key passages to recite them in conversation, as I can’t grab a Bible during a haircut. I’m eager to show him that God, His creator, loves this Earth, loves people and is so wise as to create a salvation that does not make its adherents so Heavenly-minded that they are no Earthly good, but indeed, just the opposite. 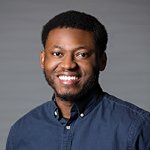 David Noel, Jr. is the Director of Youth Ministry and leads Crossroads, our young adults ministry.