Maybe the better question is, which disciple are you most like? It’s easy for me to answer this question, especially around Easter and the resurrection. I want you to know I’m not necessarily proud of whom I would be like. But I’m pretty certain I know who it is. I imagine I would be like Thomas.

Here’s a disciple that encouraged the other disciples to travel with Jesus to Lazarus home. The disciples thought Christ might die on that trip. Thomas was willing to travel with Him and die with him. (John 11:8, 16). I can hope I’d be like that. But that’s not where I think my major similarity to Thomas rests.

Shortly after Lazarus was brought back to life, Christ was crucified, dead and buried.

After Christ was crucified, Thomas was apart from the other disciples (John 20:24). Christ’s second appearance was to the disciples sitting behind locked doors so no one could attack them. (John 20:19-20). Christ showed them his scars.

I cannot imagine the emotions they must have shown. Later the disciples caught up with Thomas. John 11:25 simply says the disciples told Thomas “We have seen the Lord.” Personally, I doubt they whispered that message. Now here’s where I probably would have been like Thomas. I’d say, “You must be kidding. Unless I see the scars in His hands, I simply don’t believe you.” I would doubt.

It took a week (John 20:26) for Christ to reappear to the disciples. Again, they were hiding behind locked doors. Jesus said, my guess is directly to Thomas, “Put your finger here, see my hands. Reach out your hand and put it into my side.” Christ concludes that instruction with what I believe is one of the most informative instructions he gave a disciple. Jesus said, “Stop doubting and believe.” There is no subtlety in that statement.

Again, I simply cannot imagine the emotions running through Thomas when he says “My Lord and My God. (John 20:28) What a confession!

How many times have I doubted? Too frequently. Why do I doubt? Because I’m not getting my way. When do I doubt? When I want to justify wrong actions. What is the result of my doubt? Nothing good.

Jesus went on to tell Thomas, “Because you have seen me, you have believed; blessed are those who have not seen me and yet have believed. (John 20:29)”

Deuteronomy 31:6 is quoted in part in Hebrews 13:5 – “The Lord Himself goes before you and will be with you. He will never leave you nor forsake you.”

Thomas had a lot to learn about that verse. That’s another similarity I have with Thomas.

The resurrection overcomes everything. God is alive. Satan and death are defeated. We have hope. Like Thomas, let us cry out, “My Lord and my God.” 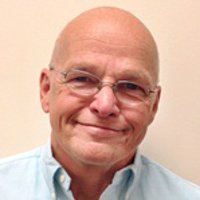 Ken Lost is the executive director.
Scroll to Top