Learning From Naomi About God’s Provision

We’ve been looking at the Old Testament Book of Ruth in our small group and trying to see the story freshly, through the eyes of those who would have read the story when it was written.  Our American world in the 21st century is wildly different than what Naomi, Ruth and Boaz experienced.  There are crazy customs that we would never dream of today and no computers or Facebook.  What!?  However, did they survive?

Well, in fact, as the story goes some of them did not survive.  Naomi’s husband and two sons both die at the beginning of the story.  And while the famine that begins the story is very real and very challenging, it is used by God to effect His purposes, ultimately with the birth of Christ carrying the DNA of Naomi’s daughter-in-law, Ruth.  It is an incredible story of God’s care for all of us – as ordinary people – in everyday life.

As we reflected on this story, one thing really grabbed our attention.  Naomi, was an immigrant to Moab and then 10 years later returned to Israel as a widow.  She had no safety net.  If she went hungry, it was because she had no way to obtain anything to eat.  There was absolute dependence on the God’s provision for her every meal.  It gives a completely new meaning to the phrase in The Lord’s Prayer, “Give us this day our daily bread.”

Our world is amazingly different.  We go to Costco, Walmart, Shoprite or even Wegman’s, and rarely think about the effort and provision of God’s hand in the seeds being planted, the growth of the vegetables, the effort of harvesting and the delivery to the store.  Instead, we are disappointed when we can’t get fresh oranges when there is no reason in the world that we should expect fresh oranges here in the northeastern states of America in the off season.  But this is what automation and computers and supply chains have provided for us.  We enjoy amazing bounty at our finger tips.  Literally!  Because if we can’t find it at our grocery story, we simply order it on Amazon, and it’s delivered to our doorstep.  Incredible.

Naomi’s reality was far removed from ours.  If there was no food, it was directly under God’s control.  She knew the story of Joseph in Egypt and the seven years of plenty and of famine.  She saw famine in Bethlehem and knew it was under God’s hand.  When there was food, it was from Him.  Naomi knew what had been promised if Israel obeyed their God.  As it was written by Moses, so many years before in Deut. 28, “Blessed shall be the ground, blessed shall be your flocks and blessed will be your barns.”

It has been a reminder to us to be grateful for all the Lord provides, even at the grocery store.  Our reality even though very different from Naomi’s at some levels, ultimately, really is the same.  It is all under the Lord’s control. Maybe saying a quick prayer as we go through the aisles is a good way of remembering His care and provision.  “Lord, thank you for Cheerios (especially Honey Nut Cheerios).  Lord thank you for soup, for fresh milk, for fresh vegetable, for paper towels.”  We are truly blessed even in the small things.

As the story of Naomi ends, she has been made full again through the birth of the grandfather of King David, who was the image of the greater King, Jesus Christ.  And we too, through Jesus have been made full in his remarkable provision of forgiveness and salvation.  Let us be truly grateful for God’s provision in the small, routine matters of daily bread, even as we remember the great and mighty works of our God through Jesus Christ! 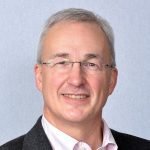 Lee Augsburg is a Ruling Elder and a member of GRC since 2013 .