Put yourself in the shoes of the shepherds on that night (see Luke 2:8-18). Shepherds were a despised class in Israel, because their work prevented them from keeping the ceremonial law. Their nomadic lifestyle encouraged many to stoop to thievery, and they were considered so unreliable that their testimony was not admissible in a court of law. In other words, you’re a spiritual and cultural outsider.

You’re minding your own business, going through the normal, probably mundane, routine of life. And then God interrupts your world. The sky erupts with the brilliance of an angel glowing with the glory of the Lord. It’s a terrifying sight! Incidentally, this angel wasn’t a cute cherub. While that would be startling, a fat floating baby with wings would not be terrifying. This is a mighty warrior, a general in God’s heavenly army, as we learn when “a great company of the heavenly host” later appeared to join it in the sky (“host” is a military term for “army”). After the initial shock of what you see, your first thought, cognizant of your general unworthiness, is probably, “Oh, no! Here comes God’s judgment!”

But then the angel reassures you that it’s not going to wipe you off the hillside. In fact, it brings good news that the hostility and alienation between God and sinners has ended! “Do not be afraid. I bring you good news of great joy that will be for all the people. Today in the town of David a Savior has been born to you; he is Christ the Lord” (vv 10-11). Then the rest of the heavenly army appears, worshiping God for the peace he brings to people on earth through this Savior (<v 14).

What do the shepherds do next? What would you do, if you were one of them? Having heard the good news, they want to experience the Savior for themselves, and so they rush off to see this baby whom the angels announce and celebrate. The shepherds experience the gospel. Outcasts and cut off from God, God graciously appears and brings peace and joy and reconciliation through Christ. Marginalized and insignificant, God graciously sends an army to find them and include them. Sit for a moment with the emotions they must have felt. Let it encourage you as you reflect on how God brought peace to you through his Son… or what it would feel like to experience that if you haven’t yet.

They are so overfilled with joy for what it means for the Savior to have come… they’re so excited that they are able to see and experience his presence (Immanuel, God with us!) that they then do the most natural thing in the world. “When they had seen him, they spread the word concerning what had been told them about this child, and all who heard it were amazed at what the shepherds said to them” (vv 17-18).

They are the first examples of how the gospel has always spread around the world and throughout time. Famous church historian, Kenneth Scott Latourette, explained that the primary change agents in the spread of the gospel throughout history have been the nameless believers who earned their livelihood in some secular manner and spoke their faith to those they met in a natural fashion. It’s as people encounter Jesus and are filled with joy at what he means to them, that they “cannot help speaking about what we have seen and heard” (Acts 4:20). The deeper our experience of God’s grace, the more motivated and prepared we are to “give an answer to everyone who asks you to give the reason for the hope that you have… with gentleness and respect” (1 Peter 3:15).

The angels explain the intent of Christ’s birth: to bring “good news of great joy that will be for all the people” (Luke 2:10). People from every tribe, tongue, and nation. It begins, but does not stop, with us. Saved people are sent people. Not out of obligation, but because it is the most natural thing in the world to share the joy we have received. 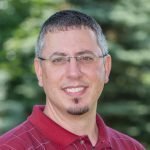