Jesus and the Insignificance

We’ve been having a great time in Grace Kids these days!  For those of you who aren’t aware, we’ve done a virtual Christmas in July VBS and have been meeting with the kids on Wednesdays to learn about Jesus our Savior who was born for us at Christmas.  I’ve enjoyed having a little Christmas tree up at my house in July and the kids have enjoyed this out of the ordinary theme while making snowmen with fake snow and singing Christmas carols.  This couldn’t be more fun, especially when the weather is in the mid to high nineties!

Most importantly, we’ve all been considering who Jesus is and why he came.  This past week we learned about Jesus’ birth and the shepherds who received the first birth announcement of our Savior.  One of our activity leaders asked the kids, “Why do you think God chose to give the first birth announcement to shepherds?”  A child’s beautifully accurate answer was, “God wanted to show that Jesus’ love is for everyone and not just for important people.”

What a beautiful truth.  Jesus love is for everyone, especially the insignificant.  Consider Paul’s words in 1 Corinthians 1:26-30:
“Brothers and sisters, think of what you were when you were called. Not many of you were wise by human standards; not many were influential; not many were of noble birth. But God chose the foolish things of the world to shame the wise; God chose the weak things of the world to shame the strong. God chose the lowly things of this world and the despised things—and the things that are not—to nullify the things that are, so that no one may boast before him. It is because of him that you are in Christ Jesus, who has become for us wisdom from God—that is, our righteousness, holiness and redemption.”

God operates an upside-down kingdom.  He chooses to call to himself those who are not wise, influential or of good pedigree.  As a matter of fact, he calls those who the world would consider foolish, weak and despised.  He does this to show his glory and to eliminate any opportunity for boasting.

As Phil Ware puts it in Two Minute meditations, “If God chose to reveal his glory first to shepherds, then the King of Glory is making an important statement to each one of us personally: Jesus came for me!  I am not too low, too insignificant, too unimportant too powerless, to forgotten or too anything for God to love me, search for me, find me and want to bring me home.”

Praise God that he is a God who loves and calls everyone, especially the insignificant. 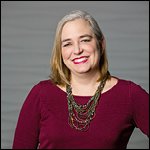 Karen Jacobsen is the Director of Children’s Ministry and of Refuge 686, a foster and adoption care ministry.