Last week Betsy and I had to put down our dog, Scout (named after Jean Louise Finch in To Kill a Mockingbird). Scout was part of the family for 16 years.

Scout was part beagle, bred to sniff out and chase rabbits. We didn’t have any rabbits, so she chased tennis balls instead.

Chasing balls was Scout’s calling in life. She chased balls on the ground and in the water after she learned to swim. In her glory, she was a sight to see, sprinting across the grass, turning on a dime, with boundless energy. She always had a tennis ball with her; she slept with one and placed one by the side her bowl when she ate. She was affectionate, friendly to man and beast, and soft as a newborn baby. We loved her.

But then she got old and developed cancer. Steroids kept her going, but her ball chasing days were over. Eventually, she had difficulty walking, and spent more time in her bed. Last week she couldn’t get out of bed and quivered with each breath. It was time.

Her death was painless. As she died, we wept. Unexpectedly, I kept saying, “I’m so sorry Scout. I’m so sorry.”

Why would I say I’m sorry to Scout, an animal? Maybe because it was my fault, humanity’s fault, she couldn’t run any more, couldn’t be the glorious creature she once was, but had to grow old, decrepit, and die.

When we rebelled against God, the earth itself was cursed. Our sin brought the rest of creation, including our pets, under a curse. Pets grow old, suffer, and die, just as we do.

But Paul doesn’t leave us without hope. In the age to come, when there will be a new heaven and earth, all of creation will be set free from its bondage to corruption. This very creation that’s been here countless years with all its life will be restored in our redemption.

Does this mean I will be reunited with Scout in the new age?  I don’t think it’s unreasonable to hope so. The Bible says nothing I’m aware of that precludes it. God can raise an animal from the dead with a new body and restore its mind just as he can raise us from the dead. The Bible speaks poetically about animals inhabiting the new earth: the wolf will lie down with the lamb. Can you imagine the new earth without a multitude of living plants and animals? I can’t.

Since it’s neither unreasonable nor unbiblical to think that the lives of our pets might be included in the general restoration of all of creation, I will hope for it.

I hope to see you soon, Scout. 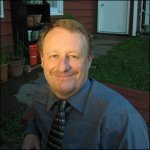 Stan Tyvoll and his wife, Betsy, have been members of GRC for about 12 years.  He currently leads a weekly Growth Group and helps to teach 3rd and 4th grade Sunday School.