Giving Out Our Poverty

I grew up in a church where most members lived below the poverty line, though, you would never have guessed it. Not because they attempted to live outside of their means; it was clear they did not own many expensive things. But because they shared and gave gifts to each other in a way that showed that money was not essential in order to give gifts. Even now, every time I go, I am showered with candies, books, clothes, body lotions, and even cash. Sometimes, I don’t want to accept their offering, because I feel they need it more than I do.

Recently, something touched my heart while reading God’s word. In Mark 12:41-44, Jesus watched people give their offerings at the treasury. He watched the rich people give large amounts of money, then a poor widow walked up and put in two copper coins (equivalent to a penny). Jesus remarked, “Truly, I say to you, this poor widow has put in more than all those who are contributing to the offering box. For they all contributed out of their abundance, but she out of her poverty has put in everything she had, all she had to live on.”

Jesus, the great discerner of hearts, commended the widow’s giving since it came from a place of poverty. Jesus, however, was not merely making an example of her to encourage the poor to give a high percentage of their wealth than the rich. His commendation was directed towards her faith, as it must have taken an immense amount of faith to give “all she had to live on.” That penny must have hurt to give, not because she was stingy, but because it could have paid for her next meal.

I realize that most of you who are reading this probably do not live below the poverty line, but in many ways, we are all poor. Some are poor in time, meaning you have very little free time. Let us consider giving our time to those who need it. Some are poor in service. Let us consider seeking more ways to serve our church family, neighborhood, or spouse. There are some who give time to others because they have hours upon hours of free time. There are some who serve in various capacities because it is natural for them and the opportunities are convenient, therefore they give out of abundance. This is not inherently bad, but what the widow did is considered a greater act of love.

What made the widows act greater in love? It was her disposition towards her offering, one that stemmed from her great faith. We can see three things about the widow’s disposition in this act that we can try and emulate for ourselves.

Brothers and Sisters, when we give to others, are these principles reflected in our giving? Do we highly value the work of God? Do we believe that God will sustain us in the way he sees fit? Have we had wrong views in regards to giving? Let us encourage each other to seek out what it is we lack and to use it to bless others. God gives us the privilege to give, let us take Him at his Word.

“In everything I did, I showed you that by this kind of hard work we must help the weak, remembering the words the Lord Jesus himself said: ‘It is more blessed to give than to receive.’” (Acts 20:35) 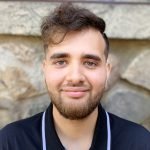 Elias Gonzales-Ascenio is finishing his last year in college.  He served as our Youth Ministry intern this summer.