Being a science geek most of my life, I have always enjoyed futuristic conceptualizations captured in science fiction media.  As I look back on medical progress, it is almost shocking how far science has advanced: Things that were once thought impossible, have now become reality.  Take gene therapy, for example, in which a healthy gene is extracted from a healthy cell or subject and inserted into the body to replace an unhealthy or mutated gene. This allows doctors to treat people who are born with a genetic defect such as cystic fibrosis, hemophilia, or other inherited disorders.  Obviously, this is a much more complex (and still experimental) process than I make it sound, but I find it fascinating that current technology can take something so integral to our being – like our DNA – and alter it to offer hope to those afflicted with debilitating diseases.  I don’t think it’s too far reaching to see how Christ is like “gene therapy” for our souls.  The disease we are born with is sin.  But “God made him who had no sin to be sin for us, so that in him we might become the righteousness of God” (2 Cor 5:21).

Perhaps obscure science like gene therapy isn’t your thing, but you’re up for a good movie about aliens coming to earth like E.T., Independence Day, Close Encounters or Superman (yes, Superman is an alien).  These are stories of both benevolent and malevolent creatures from beyond, who invade our planet and sometimes adapt human form, to either assimilate, rehabilitate or annihilate our species.  But that’s all fiction, right?  Well, John 1:14a tells us that Jesus “the Word became flesh and made his dwelling among us.”  Not only that but in His alien divinity, His humanity was also revealed, “Who, being in very nature God, did not consider equality with God something to be used to his own advantage; rather, he made himself nothing by taking the very nature of a servant, being made in human likeness.  And being found in appearance as a man, he humbled himself by becoming obedient to death— even death on a cross!” (Phil 2:5-8).  Jesus came into our world like a foreign alien to serve and to save even though he was despised and rejected by the very ones for whom He died.

Whether it’s science or fiction that supplies the analogy, Advent is upon us and there is no better time to reflect on what is coming, or more importantly, Who is coming.  One may tend to think of this time as just a clean, sanitized children’s story of a baby in a Bethlehem manger.  But don’t overlook the fact that this was a radical invasion of Creator becoming like the created, and the planting of a virtual nuclear love bomb into the world; the fallout of which we will sing the praises until the 2nd Advent when Jesus comes to take His children home. 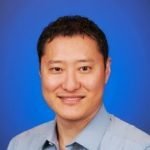 John Chung is a Ruling Elder and serves on our Worship Arts team.