All in All, It’s Not Just a Hole in the Wall

Several years ago, a client – a pest control company – asked me to update its blog with a piece about how mice can crawl into walls and air ducts to die. As their bodies decay, they harm the air quality in the house to the point of causing respiratory problems for its inhabitants. Working on this article was disturbing because the photographs of some of the affected houses were beautiful – immaculate rooms, perfect landscaping, ritzy furnishings, etc. These well-kept homes had vermin in the walls! After completing the blog post, I tossed and turned all night, wondering what carcasses were behind the walls.

These last few months I have been working through the prophet Ezekiel – easier said than done – and one chapter especially reminds me of the dead mouse article. In the eighth chapter, God transports the prophet in a vision from exile in Babylon to the Temple in Jerusalem. Right upfront, at the north entrance, Ezekiel sees a pagan idol, “the idol of jealousy,” or the idol that provokes God to jealousy. This may have been an Ashera pillar or a statue of some sort. Whatever it was, it represented in-your-face defiance of Judah’s God. And yet, God told Ezekiel:

But you will see things that are even more detestable. (Ezekiel 8:6)

What could be more detestable than the shameless, pagan carnality he had just witnessed? For the next spectacle, Ezekiel had to use some muscle:

Then he brought me to the entrance to the court. I looked, and I saw a hole in the wall. He said to me, “Son of man, now dig into the wall.” So I dug into the wall and saw a doorway there.  And he said to me, “Go in and see the wicked and detestable things they are doing here.” So I went in and looked, and I saw portrayed all over the walls all kinds of crawling things and unclean animals and all the idols of Israel. In front of them stood seventy elders of Israel, and Jaazaniah son of Shaphan was standing among them. Each had a censer in his hand, and a fragrant cloud of incense was rising. He said to me, “Son of man, have you seen what the elders of Israel are doing in the darkness, each at the shrine of his own idol? They say, ‘The Lord does not see us; the Lord has forsaken the land.’”

So, this scene was more offensive even though it played out in secret. Why? Perhaps because the participants (Elders! It figures!) should have known better. More likely still was the attitude they had assumed – that God neither knew nor cared. This toxic belief was buried deep within the structure, where it could fester unchallenged.

We are temples, brothers and sisters. All too often, though, we indulge idolatry, just so long as it is contained, cordoned off, and concealed, as it was with the elders of Israel. Do you hold a brother or sister in disguised contempt, treating them with courtesy and civility openly? Are you hiding your Light at work to get along and go along? Do you withhold giving to God in order to give the family a nicer vacation? Social correctness, preserving livelihood, and wanting the best for your kids are worthy virtues…unless they are the walls behind which unbelief and cynicism dwell.

Remember, God can see the dead mice in our hearts when people near to us can not. He can smell the spiritual carbon monoxide and can hear the silent hymns we sing to idols. Praise him always because the blood of Jesus covers it all. It is for our sakes that he reminds us:

We will be glad when that day arrives. 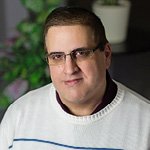 John Gregory is a Ruling Elder and serves on our Youth Ministry team .