“It’s tough to make predictions—especially about the future.”  – Yogi Berra

Whoever coined the term “tools of ignorance” to describe a baseball catcher’s gear obviously never met the sage of St. Louis, the beloved of the Bronx.  Yogi was a lot smarter than he appeared to be.  You laugh at some of the things he said—and then you think “hmm . . .”.

For example, take his quote above.  Has there ever been a year in your lifetime when that was more apt?  If a reputable pundit at the end of 2019 had predicted that, in 2020, we would see the following, that person immediately would have lost all credibility: a worldwide pandemic, the world of sports completely shut down, every child turned into a homeschooler, every preacher turned into a televangelist, a united Congress passing a $2.2 trillion dollar relief bill in a matter of weeks, unemployment briefly reaching levels unseen since the 1930s, everyone wearing face masks, and racial injustice dominating the news cycle and social media.  And that’s just the first half of the year!

By now, crystal balls should be a dime a dozen on eBay.  The varying predictions of when the COVID-19 infections and deaths would peak—and how many people eventually would be infected or die—in retrospect start to look like those hurricane spaghetti charts.  You know, the ones that showed about eight different models, resembling spaghetti strands, suggesting the hurricane’s path, and nobody really knew the path and intensity the hurricane would take.  At least with hurricanes, we have years of data upon which to build models.  With COVID-19, we’re trying to analyze the storm while we’re riding it.  In the words of the Doors, now we’re all riders on the storm.

Will there be another outbreak of COVID-19 in the fall?  Will we have a vaccine?  Will the protests over racial injustice result in serious and substantive discussion and action?  What will schooling look like in the fall?  How long will the economy take to recover?  What will the long term effects of the disease, the preventative measures, the reduced interpersonal interactions, and the economic fallout, be?  And how will all this affect the church’s worship and ministry?

Well, I don’t know what the future holds.  But here is what I do know: I know who holds the future.  It is none other than our sovereign, all-knowing, everywhere present, all powerful, loving and redeeming Lord.  And he doesn’t just know the future; he creates the future!  “The decrees of God are, his eternal purpose, according to the counsel of his will, whereby, for his own glory, he hath foreordained whatsoever comes to pass.” (Westminster Shorter Catechism 7)  As WSC 11 reminds us, God preserves (Psalm 104:24,27-28) and governs (Psalm 103:19) all his creatures and all their actions, and does so in a most holy (Psalm 145:17), wise (Isaiah 28:29), and powerful (Hebrews 1:3) way.

God’s providential control extends to nature (Matthew 5:45), nations (Daniel 2:21), and individuals (I Samuel 2:6-8).  Brothers and sisters, God’s got this!  He knows, he cares; he protects, preserves, and provides!  Go out and live in faith, not in fear; in trust, not in terror; in confidence, not in consternation.  The one who created the universe simply by his Word, the one who become the Word made flesh for us, the one who inspired the Word, is in control.  Let us respond with humility (Job 40:4-5), praise (Romans 11:33-36), and obedience (I Samuel 26:9-11).

Yes, to quote Lawrence Peter Berra, “the future ain’t what it used to be”.  But the God of heaven and earth is exactly who he always has been, and always will be. 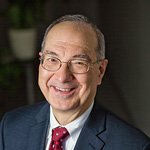